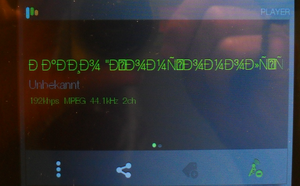 +1
Peter il y a 9 ans
Addendum: The wrong display is with the Android stream engine, from Settings. With ffmpeg stream engine it displays in cyrillic letters properly.

0
Jona (Lead Developer) il y a 9 ans
Hey Peter, could you try using XiiaLive Beta to see if this issue is fixed for you? http://goo.gl/lxsYdz