Can only stream via WiFi

I stream via Ethernet on past and current versions of XiiaLive and I've never had a problem.

I've used WiFi on my FV-1 Android TV v2.2(Android v2.2) box and it works fine whether using Ethernet or WiFi.

One can set an alarm and have XiiaLive wakeup and fade in Music of your choice at the time you have set.

At the time that alarm is set to, XiiaLive fades in music and starts as one would expect.

This is also the case for the FV-1 Android TV v2.2 [rooted]. Bit surprised this works as it's just a Chinese 'desktop/media' box running Android v2.2.

But given one can set an alarm and it wakes up and plays music one is just happy it works.

9 years ago
XiiaLive Beta v3.0.0.03
On an FV-1 Android TV running Android V2.2 displayed on 40" TV we see the following.
You mentioned you're working on the layout, so just something to show to indicate where things are with this device on this current beta version.

There is no inline volume. There is a volume icon, but it doesn't seem to do anything at this time.

Also, 'Alarm failed to be scheduled' on this device too. 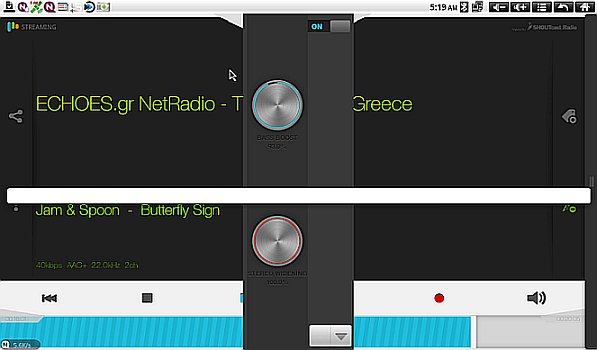 XPERIA X10i v2.3.3 std and still getting "Alarm failed to be scheduled!" when attempting to set an alarm.

Alarm function
So... how are we going with this planned feature of a wake-up radio alarm?

Should we expect to see it any time soon?

Would be a BIG promotion point for XiiaLive
10 years ago
﻿